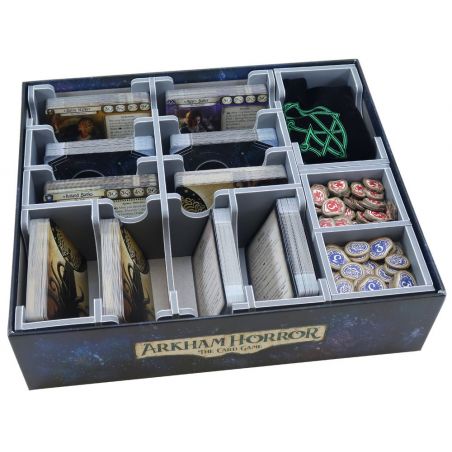 Insert designed for games with external box dimensions of 25.4 x 29.2 x 7.6 cm. Insert compatible with the new rectangular boxes for Living Card Games such as Arkham Horror: The Card Game The Revised Core Set, The Lord of the Rings: The Card Game The Revised Core Set, as well as their expansions with the same box size. The insert is sized for sleeved cards, and comes in two variants with either space for more game components such as bags and dials, or with additional card storage. There is also a stack of three token trays. One tray, which can be used be used on either side of the box end, has no middle divider to give space for larger tiles and mini sized cards. The main large card tray has two bases in the corners to add rigidity and to make assembly easier. The smaller end trays all have the same sized base and can be interchanged as needed. When assembling the insert you need to decide whether you need more space for tokens/dials/bags or to add space for additional cards. In this way we have made the insert more flexible for a variety of game boxes. Variant 1 has space for 800 sleeved cards in total, while Variant 2 has space for 900 sleeved cards. When packing the box, simply add the Rules and Learn to Play books on top of the insert trays. This fully fills the box and allows for vertical storage of the game. The FS-LCG3 insert can also be used in expansions with the same box size (for example AHTCG: Edge of the Earth Campaign Expansion box). As the character mini cards and chaos bag will be in the main game box, we recommend using here the second assembly variant to provide more space for cards. The main card tray has dips at one end to provide room for the ring binder on the campaign guide book. This product consists of a flat-pack of 4 Evacore sheets. The trays require assembly, which is quick and fun, using ordinary PVA glue. Detailed instructions are included in the package.