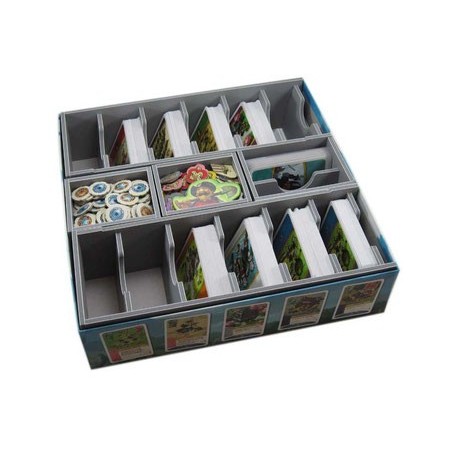 This insert is designed to be compatible with Imperial Settlers and the Aztecs, Atlanteans, Amazons, Why Can't we be Friends, 3 is a Magic Number, We didn't Start the Fire expansions. The design provides both efficient storage and improved game play. The token trays can be utilised during the game, and they greatly aid set-up and clear-away times. The trays are arranged with card trays down the side and three layers of token trays in the middle. These are the token and tile trays. There are two trays for storing the Atlantean and Aztec tokens. There is one long tray for the goods markers, and another for storing the gold, raze, defense and other tokens. There is space for 810 sleeved cards in total. These trays have no bases and are meant to remain inside the game box and not be removed. This game boards need to be placed in the box in the following sequence. First go six faction boards in a recess at the top of each of the large card trays. Then go the score board and a seventh faction board if you have it. The rule books go last, with the main one on top. Note - the lid will ride high by 4 mm when closed. This is to allow the sleeved cards to be stored vertically, and the boards to be stored on top. This product consists of a flat-pack of 4 Evacore sheets. The trays require assembly, which is quick and fun, using ordinary PVA glue. Detailed instructions are included in the package.