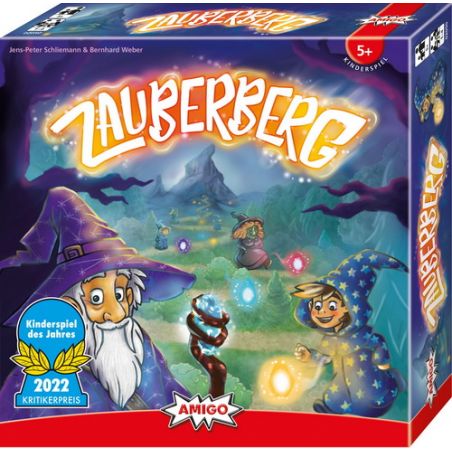 In Magic Mountain, a.k.a. Zauberberg, you want to move the sorcerers' apprentices down the mountain ahead of the witches — but you don't always know how the will-o'-the-wisps will make the figures move.

To set up, place supports on the game board to elevate the starting area, then place six sorcerers' apprentices in the back row and four witches on their designated starting spaces. Add the five colored will-o'-the-wisp marbles to the bag.

If you manage to move four sorcerers' apprentices to the bottom of the mountain before three witches get there, you win! You can adjust the difficulty of the game by requiring more sorcerers' apprentices or fewer witches or both. Alternatively, you can play the game competitively, with each player or team trying to get their group of four figures down the mountain first.

[Admin note: Magic Mountain is listed for 2-6 players, whereas Zauberberg is listed for 1-4 players, but the gameplay seems identical in both releases.]