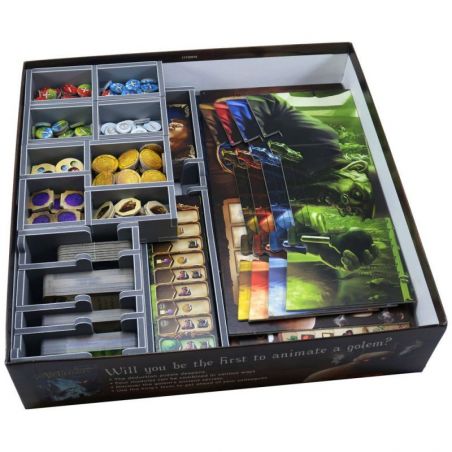 Insert designed for game with external box dimensions of 29.7 x 29.7 x 7.1 cm. Insert compatible with Alchemists, including The King's Golem expansion. The design provides both efficient storage and improved game play. Many of the trays can be utilised during the game, and they greatly aid set-up and clear-away times. The trays are arranged in up to three layers. The smaller boards are stacked next to the trays, with the rest on top. The insert includes trays for storing and organising all of the game components. Each player recieves their own player tray. The insert includes one large card tray, which has space for all cards to be sleeved. The tray includes one slot for the eight King's mood tiles. The top of the tray has a recess, which is for storing the six encyclopedia grant tiles. As mentioned above, all of the trays can be used during setup and game play. Alchemists comes with a large number of varyingly sized game boards and screens. This can look a little daunting at first, but really it is a matter of stacking the narrower boards/screens in the bottom of the box, the two wider boards in the middle (which are used to hold the insert trays in position), and the irregularly shaped triangles at the top. When packing the box the first thing to do is to place the narrower boards and screens in the bottom of the box next to the insert trays. First stack the folded player screens, with the smaller player board added to the recess on each side of the screens. Then add the golem research & project boards, and the exhibition and scoring reminder boards. On top of these add the upper parts of the player screens. Next goes the larger encyclopedia board, with the top layer of token trays overlapping one end, and the theory board goes on top. Now that the insert trays and boards are in the box we can add the last layer. The scorepads go on the right hand side, and the player results triangles on the left. The token trays hold the triangles in position. Then add the gamemaster board and two smallest tiles (starting player token & the under-the-counter artifact board). The main game board and rule books go on top of everything. This fully fills the box and allows for vertical storage of the game. This product consists of a flat-pack of 3 Evacore sheets. The trays require assembly, which is quick and fun, using ordinary PVA glue. Detailed instructions are included in the package.