Through the Ages - Folded Space Insert 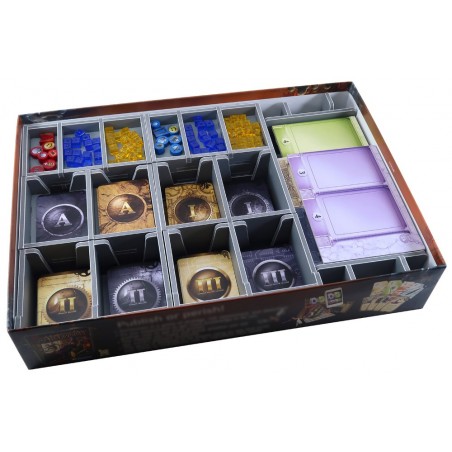 Insert compatible with Through the Ages: A New Story of Civilization, including the New Leaders and Wonders expansion. The design provides both efficient storage and improved game play. Many of the trays can be utilised during the game, and they greatly aid set-up and clear-away times. The insert is arranged in up to three layers. The design includes two filler trays which hold the smaller boards on the right hand side of the box. These trays also help position the rules and other boards. About the trays from the insert: all component types are split by type, organising all the game components. There is space for all cards to be sleeved, and each player has their own starting tray to help with setup and game play. The different age decks each have their own trays meaning that they can be placed straight onto the table ready to play. As mentioned above the insert includes two filler trays which are placed at one end of the box. This space might be utilised in the future for a further expansion should one be released. When packing the box first place the small current age, wonder and leader boards on top of the filler trays. This is followed by the large rule books and player boards placed on top of the trays. Next place the culture and science boards. Lastly place the military and card row boards, together with the expansion rule book. Once fully loaded the box is filled to the top, allowing for vertical storage. This product consists of a flat-pack of 5 Evacore sheets. The trays require assembly, which is quick and fun, using ordinary PVA glue. Detailed instructions are included in the package.