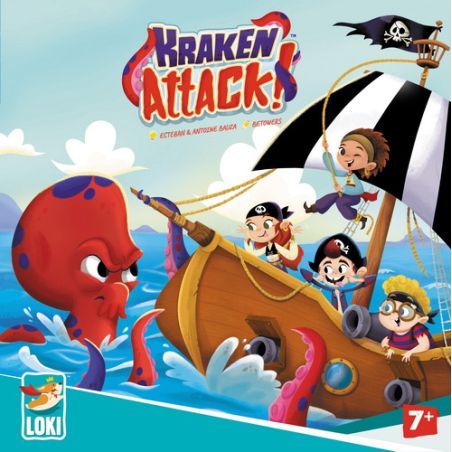 Your pirate crew is sailing the seven seas looking for adventure when the tentacles of the terrible Kraken Tootone suddenly burst from beneath the waves to attack your ship!

Quick! All hands on deck! Grab your sabers, pistols, and cannons! Join forces and coordinate your actions to save your ship before Tootone makes smashes 4 holes in your ship!

In Kraken Attack!, you use pirate skills, repair damage to the ship, and choose the best weapons possible to stay afloat and keep the kraken at bay!

It's time to fight back! Play one action card, and apply the effects depending on the symbol(s). Don't forget the funny face if there is one on the card! It makes the kraken very angry! After completing all the actions on your card, you must move the Kraken one spot forward on the Kraken Track.