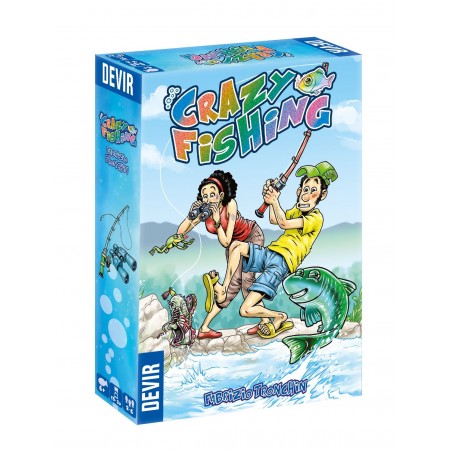 You thought it would be a nice relaxed day on the water, waiting for the fish to bite and watching the clouds drift by... but now it's a frantic race to catch the biggest fish and prove once and for all who is the best fisherman!

Use the right bait with your best rod and reel to lure out the biggest fish you can catch! Make sure you have the gear you really need so you can beat the competition and get those fish faster!

In Crazy Fishing two to six players become fishers who compete to catch the biggest fish in the sea. You play over a number of rounds divided into three steps: The cast, where all players play simultaneously and choose and play one Rod'n'Reel card and one Bait card; The catch, where they catch fish based on the Speed of the Rod'n'Reel cards and Reel'em in! where you refill your hand. The winner is the player who has the highest scored obtained catching fishing and bonus cards.